Introduction. I’m originally from a small town of 10,000 people called Atchison in Kansas.  After high-school I studied at the University of Kansas where I earned three degrees:  one in Mathematics, Economics, and lastly French (yes, most of my life at that point revolved around studying). When I graduated I had the opportunity to leave […]
⏱Temps de lecture : 1 minute 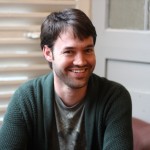 Résumé : After studying at the University of Kansas and earning 3 degrees (wow), Jesse came to France to do an Erasmus Mundus program and after then decided to launch a business after having a negative encounter with the first standardized test that he took. His company, Vinciaprep, is a sort of “prépa” for people wanting to get into graduate programs.  They provide GRE and GMAT courses, help students write their application essays, and finally prepare applicants for their interviews.

I’m originally from a small town of 10,000 people called Atchison in Kansas.  After high-school I studied at the University of Kansas where I earned three degrees:  one in Mathematics, Economics, and lastly French (yes, most of my life at that point revolved around studying). When I graduated I had the opportunity to leave the land of cows and corn to come study in Europe in an Erasmus Mundus program. I decided that doing a doctorate wasn’t for me so I stopped after getting my masters, and now I help students get into MBA, PhD, and masters programs.

My journey began when I went through the university application process during my third year in high-school.  I took a standardized test called the SAT, and unfortunately it didn’t go well enough for me to get a scholarship.  I couldn’t understand why I couldn’t do well on that stupid test, and felt bitter for several years afterward.  Then I had to go through a very similar process 4 years later when I was applying to PhD programs.  This time, I was determined to figure out the secret to standardized tests, and after around two months of intensive studying I scored in the 99th percentile on the GRE.  After finishing my masters in mathematical economics I decided to set up my company and help people go through basically the same process that had given me so much trouble years before.

One important success that I had at the beginning of my entrepreneurial adventure was figuring out how to get on the first page some google search results.  This allowed me to have a fairly steady flow of clients, which in turn allowed me to grow the business.  Now that I have a new website I have to build up my sites search optimization again, but it should be easier this time around.

At some point I might try to take over the world or at least make enough money to buy a six square meter studio in Paris.  One of the two.

My first experience with recruiting other tutors didn’t go so well.  I’m an optimistic person and I’m in the business of making people’s lives better.  So when I first did a couple of interviews with one potential tutor I wanted to believe that he was going to be able to do a good job. I wanted to believe so much that I didn’t pay enough attention to his defaults.  It was only after several weeks of training that it became clear that he wasn’t a good match for the company.  If I had been more realistic from the beginning I would have saved both of us some time and energy.

Find other people that have their own company and try to talk to them on a regular basis.  I currently work in a coworking space (Mutinerie) and I’ve learned about numerous important issues while just hanging out with other members in the café area.  It’s the serendipity effect.

I would like to be like my grandpa who is 92 and still runs a company with the aim of finding positive uses for nuclear waste.  While our sectors are very different we are both trying to make the world a better place.  It’s cliché to say that, I know, but it’s what I’m trying to do.

My company (Vinciaprep) provides GRE and GMAT courses (standardized tests that are required at most schools) and helps students write their application essays, and finally prepares applicants for their interviews. You could say that we do a sort of “prépa” for people wanting to get into graduate programs. I would tell you more about my business, but then my competitors might copy me. I’d rather catch them by surprise 😉

The next step is just to continue to grow.  Hire a new tutor as demand increases, improve my materials, and work on our marketing. It may not sound very exotic, but I’d rather do things correctly than try to take over the planet too quickly.

I suppose I’ll end this by giving another piece of advice.  You need to know yourself.  Setting up a company requires discipline, optimism, and determination.  If you’re not disciplined, set up meetings in the morning so that you stay on schedule.  If you’re not generally optimistic, surround yourself by optimistic people.  And if you’re not determined, then you shouldn’t become an entrepreneur.  But if you are these things, and particularly if you’re young, setting up a company could be great for you because French businesses often don’t value young talent as much as they should.